The goals of this activity are:

Consider the activity models and answer the questions provided. First reflect on these questions on your own briefly, before discussing and comparing your thoughts with your group. Appoint one member of your group to discuss your findings with the class, and the rest of the group should help that member prepare their response. Answer each question individually from the activity on the Class Activity Questions discussion board. After class, think about the questions in the reflective prompt and respond to those individually in your notebook. Report out on areas of disagreement or items for which you and your group identified alternative approaches. Write down and report out questions you encountered along the way for group discussion. 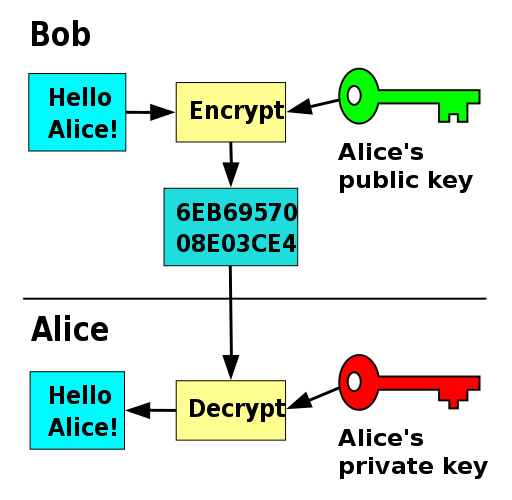 If you had to pass secret messages around the room, but had to do so by passing notes to the people immediately adjacent to you, how could you go about “securing” the messages so that only your partner at the other side of the room could read your note? You and your partner would have to agree on some encoding for the message. Many such encodings exist:

One limitation is that you and your partner must agree upon the details of the encoding. But how do you exchange that information? You’d have to pass it through your neighbors again, and thus would not be a secret. Public Key Cryptography provides us with mechanisms by which we can generate a key (a basis for an encoding), and make just enough information about it publicly available that others can use it to secure messages to us. Everyone gets to see this information - it’s enough to encrypt a message, but, amazingly, it’s not enough to decrypt it! Often, these cryptosystems are used to generate and send symmetric keys like the ones above, and this is the subject of secure Key Exchange algorithms.

We need a scheme whereby the sender can know something public - everyone can know it! Knowing the public part tells you nothing about how to decode a message, but actually allows you to encode the message for the recipient to secretly decode. The secret is never shared, so it is never transmitted. How can we do this? The idea is to generate a piece of information that contains the mechanism for encryption and decryption, but in such a way that it is very difficult to extract that mechanism - this is akin to extracting the original ingredients from a stew.

For example, we could use difficult-to-compute graph algorithms like the Vertex Cover problem as shown in this example. This is the example we’ll explore in this activity!

The public map is the key that you can use to send a secret message to someone that has the corresponding private map. The private map contains a secret about the map that allows them to decrypt the message.

To use it, first come up with a set of numbers that add up to one of your ASCII values, and put those numbers randomly on the map, labeling each vertex. This is easy to break, though, since the original value is just the sum of these numbers! Instead, take each vertex and its neighbors (there should be 4 nodes each), add up those numbers, and replace each vertex with that sum. Erase or start a new map so that the original numbers can’t be seen. Give that resulting map to another student. Can your classmate decode the message? They should not be able to. Now give it to the student with the private map (the solution to the vertex cover problem - which is difficult to compute, but gives the set of nodes that together touch all the other nodes exactly once). That student adds up only the values on the larger vertices, which is the sum of the values of each node plus the nodes they touch (which is all of them, because they’re the vertex cover nodes!), yielding the original ASCII value. Your partner can easily decode the message. This works by carefully constructing the map such that the highlighted vertices on the private map consist of the nodes that touch all vertices on the graph exactly once. This can be a difficult problem to solve if it is not provided in advance. It is breakable, though, using high school math techniques (systems of equations), in which t(i) = some partial sum of vertex values, knowing the summed values of the vertices and the neighbors on the map. Nevertheless, it is a start. We need another problem that is easy to set up but hard to break without the key.

A similar exercise can be accomplished with an actual cryptosystem using the Knapsack Problem. This system was devised by Whitfield Diffie, Martin Hellman, and Ralph Merkle and is known as the Merkle-Hellman Knapsack Cryptosystem. It was broken by Adi Shamir, who is the “S” (along with Ron Rivest and Leonard Adleman) in the RSA Cryptosystem! Diffie, Hellman, and Merkle also developed the Diffie-Hellman Key Exchange algorithm (although they may not have been the first to do so) for exchanging keys over an insecure channel.

Toward the RSA Cryptosystem: Using the Product of Large Prime Numbers for Public and Private Keys

William Stanley Jevons proposed in 1874 that it is very difficult to identify two numbers that, when multiplied together, would result in Jevons’s Number: 8,616,460,799. Given enough time, you might determine that the two numbers are 89,681 and 96,079 (which each happen to be prime numbers, so there are no other factors aside from Jevons’s Number itself and 1); however, you could imagine this becoming more and more difficult as the target number gets larger and larger.

We will generate a public key (that we share with the public, like our map with the number sums filled in above), and a private key (that we keep to ourselves, like the solution to the Vertex Cover problem that extracts the secret meaning from our encrypted message), using the RSA Cryptosystem. This system is based upon the product of two large prime numbers. The private key relies on the idea that it is very difficult to obtain the original prime factors from these large products.

Notice that many problems such as the map and the knapsack relied on modular arithmetic, using things that you’ve seen in school like “coprime” and “gcd.” Another difficult problem is factoring large numbers and finding large prime numbers. How did we get the modular inverse of 588 mod 881? It’s because we made sure that they were coprime to each other. Given numbers that don’t have any factors (3 and 7, 9 and 25) in common, what’s their gcd? 1 is the only number that divides them both. This means that we can find a modular inverse of the one number mod the other number, because there exists a number:
\(r^{-1}\) (in this case, \(r^{-1}\) is known as the Modular Inverse, not the traditional arithmetic inverse) such that \(rx = 1 (mod \; p)\).

Some interesting relationships in mathematics (called Fermat’s Little Theorem) show us that when two numbers are coprime, we can compute the modular inverse of their product r:
\(r^{-1} = r^{\phi(M) - 1} (mod \; M)\).

Unfortunately, it is very difficult to compute \(\phi(M)\), and therein lies the secret! If you generate r by multiplying together two large prime numbers that you already know (this is why finding large prime numbers is an interesting problem!), you can generate a number for which it is too difficult to compute Euler’s Totient. You can very easily compute the Totient with a loop that counts all values from 2 to C, and increments a counter if the greatest common divisor of each value and C is 1. Thus, you (and probably only you) can compute the modular inverse of values mod \(M = \phi(C)\).

An Algorithm for RSA Key Generation

The idea is that 1019 is very difficult to find even knowing \(e = 79\) and \(C = 3337\). That’s because we’d need to be able to factor 3337 into two numbers that, when one is subtracted from each and multiplied together, give 3220 – such that 79 is relatively prime to that number. If factoring was easy, we could try every number until we found it. Luckily, it isn’t so easy. Still, cryptosystems are subject to attacks similar to those you do in the newspaper, and there are some tricks (padding, salting) to dealing with that. What would you do? Some devices like RSA keys generate RSA values every minute. This is because we believe that even if these numbers can be factored, it would take more than a minute to do so, and thus the security maintained.

Submit your answers to the questions using the Class Activity Questions discussion board. You may also respond to questions or comments made by others, or ask follow-up questions there. Answer any reflective prompt questions in the Reflective Journal section of your OneNote Classroom personal section.